Isabelle Michaud-Létourneau graduated in 2008 with a Master’s in Public Health (Maternal and Child Health) from the University of North Carolina at Chapel Hill (UNC) and four graduate certificates: Peace and Conflict Resolution (UNC/Duke), Global Health (UNC), Latin American Studies (UNC), and International Development Policy (Duke). Upon graduation, she was invited to become a member of the Delta Omega Honorary Society in Public Health. After these experiences, Isabelle completed a doctorate in International Nutrition at Cornell University (USA) and post-doctoral studies in interprofessional collaboration and coordination at Université de Sherbrooke (Canada). Currently, she is an adjunct professor at Université de Montréal’s School of Public Health. Her latest work involved evaluating advocacy efforts to achieve progress on infant and young child feeding policies in five countries in West and Central Africa and nine countries in Southeast Asia and Africa. During my studies in Quebec, Canada to become a nutritionist, I sought to work in other countries to improve the nutrition of various populations. After volunteer experiences in Cuba and Bolivia, I undertook an internship in Senegal, where I used the Positive Deviance Approach to develop a program to decrease anemia among children under 5 in the village of Yoff. This was an eye-opening experience, and I learned about the importance of working with communities to find solutions to their problems. Soon after, I was able to apply what I had learned to the rehabilitation of children with severe acute malnutrition in northeastern Brazil. Those international experiences made me aware of my own limitations and triggered a desire to acquire more skills to be able to carry out meaningful actions. However, I was unsure how to do this. One day, I received an invitation to attend an event from Canada World Youth and meet other fellows who had lived this experience. By sheer coincidence, I met a colleague who had been with me in Cuba. He had just completed the Rotary Peace Fellowship and shared what an amazing experience it had been. I applied, which was one of the best decisions I ever made.

Being selected as a Rotary Peace Fellow was hard to believe because the process was lengthy with a lot of uncertainty – but it was so worth it. As a French speaker, I had never studied in English; even Spanish and Portuguese were easier for me. During my first semester at UNC and Duke, I cried many evenings, thinking I would never be able to do it. Discussions in class were so fast, and professors did not expect any less of me even though English was not my language. Fortunately, other Peace fellows encouraged me, staff from the Rotary Center were always supportive, and professors from both universities were resourceful. The Writing Center was an invaluable resource. It was hard to choose among so many great courses at UNC and Duke, and I acquired great knowledge and skills in multiple areas. The fact that we were Rotary Peace Fellows brought a completely different dimension: we were exposed to so much more.

Sometimes, people would be inquisitive when learning that I was a nutritionist. What would a nutritionist do in international conflict management after all? Even though I had read about the linkages between food insecurity and conflict – a consequence, but also a cause – I would even question it myself. Many of my colleagues were working on conflicts between nations, and it was far from my areas of focus. However, one class stood out and helped me to create my own niche in peace and conflict resolution. Reflecting on my experience, ‘International Conflict Management’ taught by Terry Barnett was the most valuable class I have ever taken (this is significant considering that I have studied at 6 universities for a total of 16 years). Every Friday afternoon, I met with my Rotary Fellow colleagues and a dozen students coming from as many countries. We learned about different tools to apply to various conflicts. Gathering around food, we took on specific roles to challenge ourselves in a safe space. This was skill-building. It was very stressful at first, but I could see well how the lessons learned in this class were useful in my own personal life. After all, when dealing with conflicts between nations, we deal with individuals.

After completing this class, Terry invited me to become his assistant for the following year: what an amazing gift to learn even more from and with him and to get to know the new class of Rotary fellows (class VI)! Terry became an important mentor in my life, as he has for many others. When he retired, he traveled around the world with his wife Virginia Carson meeting past students; I was fortunate to have them come to Montreal. This is my little tribute to Terry and Virginia, two very generous human-beings. Terry passed away in 2015. It was a tremendous loss, and I cherish those last moments spent with him and his wife. I want to honor his memory in this blog because it illustrates that embarking on the journey of a Rotary Peace Fellow really means joining a new family with the chance to meet wonderful people who believe in peace, and that we, as Peace Fellows, can make a difference.

Fieldwork in Mozambique with the Makhuwa population

During my numerous exchanges with Terry, I kept telling him that although his framework/approach was very relevant for discussions in the context of public health, I was unable to gather how exactly all the elements could be translated into my public health settings. Terry had two suggestions: 1) Adapt it the way you need for your situation and 2) keep your two feet in practice, in real-world problems. This is what I did, starting with my fieldwork with the Makhuwa population in northern Mozambique. I carried out a study to better understand the motivations of community volunteers to continue working with mothers in their communities to improve nutrition, even after a project had ended. This led me to complete my master’s while doing work in Mozambique. I then embarked on doctoral studies in international nutrition at Cornell University. The Rotary Peace Fellowship had given me the most amazing experience to build skills in so many areas, but I was striving to gain even more, to help address some of the complex nutrition challenges experienced by Mozambicans. There, a position was created for me to support the head of the Department of Nutrition on multisectoral coordination to address an important nutrition challenge: 44% of children under five years old were chronically undernourished. I worked with an amazing group of stakeholders and I learned tons. I truly love this country, as I have since undertaken various projects either working within the country or abroad during about 7 years. 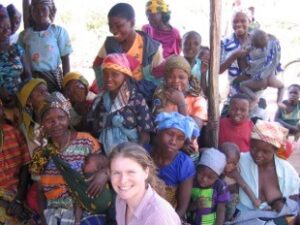 The Makhuwa population in northern Mozambique during my internship

The advice from Terry – to adapt the conflict management approach we had learned to a public health context – came to complete fruition when I took another class on conflict management at Cornell with John Forester. John knew Terry’s work, and over our discussions, he encouraged me to write a complete role-playing exercise in the context of the multisectoral work I was carrying out. Since I had worked on many projects in Mozambique, I realized that even if we were not in a context of conflict, participants with different values who worked for organizations with different mandates often brought opposing views to the table, impeding us from moving forward. The act of planning involves a process of conflict resolution, which made the conflict management approach and tools relevant to the need to adapt and contextualize. This led to an unexpected pathway. At Cornell, my director David Pelletier encouraged me to test my role-playing exercise with 44 students; since then, I have never stopped doing it. I have developed other simulations and trained hundreds of students in such an approach. I am thankful for all the encouragement I received to do it. This work culminated with the development of a leadership training with the African Leadership Nutrition Program from South Africa, which was carried out in 2019 in Ethiopia for nutrition stakeholders engaged with the National Information Platform for Nutrition (NIPN) from 8 countries. Carrying out such a leadership training in the context of nutrition work was very powerful.

Reflecting on my experience as a Rotary Fellow triggered the urge to start putting on paper a dream for the next phase of my professional work. This amazing and unique experience led me to develop what I could refer to as ‘soft skills’, which includes among others leadership, negotiation, conflict management, and strategic capacity. In short, these are skills that allowed me to be better at dealing with people and articulating processes to move forward with agreements and actions. Over the years, while my expertise in nutrition has always been essential, those soft skills were the ones that helped me to overcome so many challenges. I completed my experience as a Rotary Peace Fellow fifteen years ago. I have since worked in diverse functions to strengthen nutrition, which has allowed me to gain a good understanding of various critical dimensions, including the following:

Taken together, these experiences bring tangible dimensions and skills that I believe nutrition leaders need to acquire to tackle very complex issues and find sustainable solutions. I now dream about spending the coming years developing the capacity of the next generations of nutrition leaders to acquire a similar skillset, but over a shorter period of time. An Institute for Leadership in Global Infant and Young Child Nutrition could help achieve that, and I look forward to bringing those ideas to fruition.

None of those projects would have been possible to this extent if I had not undertaken the Rotary Peace Fellowship; it truly opened a door for me and led to a path that I could not have envisioned. I am very grateful to Rotary for this opportunity as well as all the professors, staff, and fellows who made this experience even more unique. I am not the best at keeping in touch, as work and my four children keep me very busy, but all are deep in my heart. 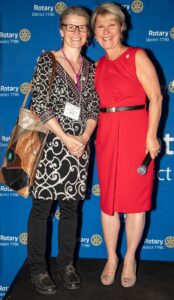 With the new president of Rotary International, Jennifer Jones at a welcoming event in Quebec City, Summer 2022