I arrived in Ukraine on May 6. For the next three months, part of my afternoon coffee break routine included checking the Ukrainskaya Pravda website. Every day I would read what seemed to be the same headline, with only the numbers changing: За сутки в зоне АТО 2 бойца погибли, еще 3 ранены. 2 soldiers killed and 3 more injured for the last 24 hours in the ATO (anti-terrorist operation) zone. These headlines, the numerous military recruitment advertisements along the escalators of Kyiv’s deep metro stations and the groups of young men in military uniforms waiting for their train on the platforms would be my reminders, that in an otherwise vibrant and colorful Kyiv, armed conflict in Eastern Ukraine is still ongoing. Since its beginning in April 2014, the conflict has resulted in 9,470 killed, of which 2,000 were civilians, 21,880 were wounded [1], nearly 1.8 million are internally displaced persons (IDPs) [2], hundreds of thousands are asylum-seekers, and material losses are estimated at USD 15 billion [3].

I chose to complete my Applied Field Experience (AFE) in Ukraine for two reasons. First, to gain practical experience and learn first-hand about international efforts to support Ukraine in its democratic agenda. My two-month internship with the Council of Europe Office in Kyiv allowed me to do that. Second, to try to better understand the conditions that facilitated the armed conflict in Eastern Ukraine – a conflict which only two and a half years ago seemed unthinkable – by doing fieldwork in the regions. In this blog post, I will sketch out the background of the conflict and share some impressions from my experience in two cities – Kyiv and Slovyansk.

November 2013 saw the rise of a wave of protests and civil unrest in Ukraine. People took to the streets to show their discontent with the decision of President Yanukovych’s government to suspend preparations for signing an association agreement, essentially a trade deal, with the European Union to seek closer economic relations with Russia. Starting as peaceful demonstrations, the protests, which would become known as Euromaidan, grew in numbers and broadened their demands to include the President’s resignation after the government ordered the use of force against a peaceful assembly of student protesters. Maidan activists also called for an end to corruption, deoligarchization, deep and comprehensive reforms across the board. The demonstrations climaxed in a revolution in February 2014. Between February 18 and 20, more than 100 people were killed in clashes in Kyiv’s main square, Maidan Nezalezhnosti. Due to international pressure, an agreement to put an end to the bloodshed and several months of political crisis was reached between President Yanukovych and the opposition on February 21. On February 22, President Yanukovych surprised the world when he and his closest associates fled, first, to Eastern Ukraine and soon after, to Russia. An interim government led by the opposition was established.

In the aftermath of the Maidan Revolution, a wave of anti-Maidan or pro-Russian demonstrations spread across the southern and eastern regions of Ukraine. 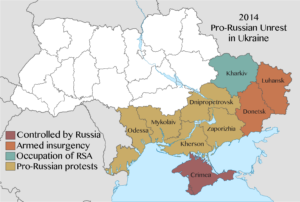 Part of the population in these regions did not approve of the Maidan in Kyiv and took to the streets in protest. The demonstrations in Crimea were followed by Russia’s annexation of the peninsula. In April 2014, pro-Russian demonstrations in the two easternmost regions of Ukraine – Donetsk and Luhansk (together known as Donbas) – escalated into an armed conflict between the separatist forces of self-proclaimed Donetsk and Luhansk People’s Republics and the armed forces of the Ukrainian government. Pro-Russian demonstrations elsewhere, despite involving occupation of regional state administration buildings and violent clashes with pro-Maidan protesters, did not escalate into an armed conflict. In the second half of May-June 2014, it became evident that Russia got more actively involved in the conflict by supporting separatists with equipment, arms and manpower. International efforts to manage the conflict have been only partially successful – the fighting between Ukrainian armed forces and Russia-backed separatists continues to this day, though with lower levels of intensity in comparison to 2014.

This chain of events has led to crises at multiple levels and triggered processes, such as nation-building, state-building, democratization, reinvigorated geopolitical struggle between Russia and the West, which seems to reinforce and run counter to each other at the same time.

The Council of Europe, a leading regional organization in the field of human rights, democracy and rule of law, has been part of the increased international efforts to help Ukraine cope with the challenging situation. As an intern at the Council of Europe field office in Kyiv, I worked on two projects: Strengthening Freedom of Media and Establishing a Public Broadcasting System in Ukraine and Reform of the Electoral Practice in Ukraine. Apart from enhancing the role of media and improving the integrity, transparency and quality of the electoral process in Ukraine, the Council of Europe Office in Kyiv provides assistance to the Ukrainian government in other important areas, such as decentralization, judicial reform, penitentiary reform, human rights protection of IDPs and others. During my internship, I had the opportunity to attend trainings and conferences organized by the Council of Europe Office and partnering governmental institutions and non-governmental organizations. My internship allowed me to immerse in the local context and actively engage with current debates.

My AFE also gave me the opportunity to live in a city full of life, colors and energy. Kyiv has a fascinating urban landscape, beautiful parks and scenic river sites. It offers many entertainment opportunities and some of the most spectacular sunsets I have ever seen. Kyiv is a city with a long history and a big cultural center, something its citizens are rightfully proud of. The city has left me with the impression of “a driver of change” with all the engaged and creative people I had the chance to interact with during my stay here.

As I traveled east, the atmosphere changed and war became a lot more tangible. The easternmost point of my journey to the regions was Slovyansk, a small industrial town in northern Donetsk region situated about 640 km south-east from Kyiv. This place that no one had ever heard of, or cared about, became world famous on April 12, 2014, when a group of locals and Russian citizens took control of the town and it became a separatist stronghold for the next three months. Slovyansk was where the first military actions marking the beginning of the war in Donbas took place. The town remained under separatist control until July 5, 2014. It has been in the ATO zone, the territory where the war in Donbas is taking place, under Ukrainian control ever since.

Life 70 km away from the line of contact is hard. Slovyansk did not experience the destructive shelling of other Ukrainian towns, such as Debaltseve and Ilovaisk. Most of the damaged buildings in town have been restored. Yet, destructions remain in the outskirts and areas just outside of town. The local economy has been severely affected and unable to reach its pre-war levels for the last two years. With a bad business climate and about 30,000 internally displaced people from the war-affected areas, about 40% of the population in Slovyansk is currently unemployed.

Apart from the material side of the tragedy, there is a psychological one. Many Slovyansk citizens held and still hold pro-Russian views. A sizeable part of the town’s population supported the separatists and the so called Русская весна or Russian Spring. After Slovyansk’s returning under Ukrainian control, these people could no longer freely express their true preferences because of the threat of being charged of supporting separatism. The situation was similar with Slovyansk citizens who held pro-Ukrainian views and who had to hide their preferences during the months under separatist control and, arguably, even before that. Because of the war, people have been forced to pick sides, to identify themselves with either one or the other (Ukraine or Russia). My impression is that this has been a painful process not only for people in Donbas, but for many in other parts of Ukraine.

In Slovyansk, I had the pleasure to meet with a small but very active group of local Rotarians. Rotary Club Slovyansk had been among the first non-governmental organizations to get actively engaged with humanitarian work immediately after the war in Slovyansk ended. Rotarians started off by removing the garbage and road blocks from the streets to make the town functional again. They cooperated with other Rotary Clubs across Ukraine to collect 500,000 Ukrainian hryvnas (about USD 20,800 in current exchange rate) for humanitarian purposes and helped deliver about 200 tons of in-kind aid to people in need. Focusing on everyday problems, whose solution is in the interest of all, has been Slovyansk Rotarians’ strategy to foster peace in their community. I have been humbled by the dedication of these men and their readiness to literally roll up their sleeves and do the work. The town is lucky to have them.

The three months in Ukraine have given me a lot of food for thought, unforgettable experiences, new friendships and, last but not least, an opportunity to connect with local Rotarians. I would like to express my deepest gratitude to Rostyslav Lukach from Rotary Club Kyiv-Center, Sergey Pustovit and Artur Nasibian from Rotary Club Slovyansk for their receiving me so warmly and for making my experience in Ukraine so much richer. I wish them all the best of luck and already look forward to our next meeting. References
Comments are closed.